Richard Baldwin on ‘Phrase 2 of the Eurozone (EZ) crisis’

An excellent article by Richard Baldwin at VoxEU.org from 5 September provides a great overview of the linkage between the various crises gripping the eurozone (EZ) and how we may be entering (or are already in) the next phase of these series of crises. Baldwin illustrates their interconnectivity with a simple diagram which PIIGSty has tidied up for clarity. 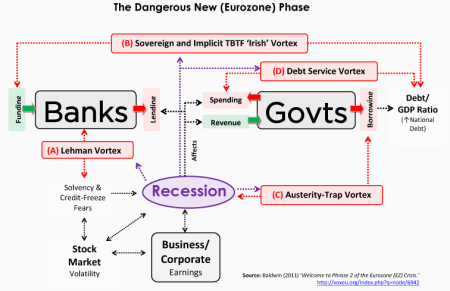 The connectivity is as follows:

To end the cycle, the options are pretty sparse, and both are debt laden, politically painful options for the richer EZ members (and aren’t particularly short term solutions either)

The bottom line? So long as economies are in recession, these 4 branches/vortexes of the current EZ crisis will continue. Yet we still live in uncertain times with daily warnings of a return to negative growth and the spectre of a double dip recession in many economies. Recessionary fears stoke these 4 branches, injecting uncertainty back into the system in a painful cyclical repetitive process that European leaders seem content to oversee as hand wringing spectators. That is what caused Italy and Spain, as well as French banks and others to head south recently before stabilising again.

When European leaders meet, the panic subsides. Echoing Mr. Baldwin, PIIGSty firmly hopes “[that European leaders] actually get up and put the crisis to bed, rather than hitting the snooze button and heading back to bed themselves.’ Who knows! Maybe the markets are pushing the leaders into action. Lets hope it doesn’t require a real scare.

UBS Economists on the € (Echos PIIGSty.com!)

In the PIIGSty Publication on the euro, we said there are fundamental aspects to the single currency which make its collapse or break-up next to impossible. Looks like we’re not alone in that (learned) opinion! Economists at UBS have totted up the sums on the cost of a country withdrawing from the euro. It doesn’t show a pretty picture.

Their main finding: “the Euro (as currently constituted) should not exist.”

The basic summary of their findings are as follows:

END_OF_DOCUMENT_TOKEN_TO_BE_REPLACED

Fortune Magazine’s Shawn Tully has a stab at analysing the eurozone/European crisis. Its nothing we haven’t covered before at PIIGSty.com but heres the summary:

Story of the euro

END_OF_DOCUMENT_TOKEN_TO_BE_REPLACED

Michael Lewis of Vanity Fair is no stranger to Europe.

In the September 2011 issue of VF, Lewis has focused on Germany – EU lender of last resort and lynchpin of the euro – in an article entitled ‘It’s the Economy, Dummkopf!’

Lewis begins with a valuable insight into the German character – something with has an historical affiliation with…well….’faecal matter.’ From bizarre childhood folklore tales and Gutenberg’s strange choice for his 2nd printing to Martin Luther’s ‘scatological’ original idioms and Hitler sexual desires–a key German character trait is an obsession with waste or at least, taking dirt and cleanliness in equal measure – an affliction deeply ingrained but hidden within.

The article pivots into more analytical territory with a reference to sobering and contrasting statistics. Greece unemployment at 16.2% versus a 20-year low German rate of 6.9%. A job in Germany which pays €55,000 pa, pays €70,000 in Greece – effectively two extra monthly payments. Greece is plaqued by debt and deficits – with the euro like a inverse gastric band meaning the binge cannot stop. Greece, according to Germans, have two choices. Slim down government (and sacrifice growth) and fiscally integrate into Europe or reform how Greeks work and make the Greek people…Germans…with all the efficiency and productivity that goes along with that stereotype. Economically, the only solution is for German to stop bitching, arguing and hoping and just write the cheque. Politically, this isn’t a runner for Merkel. So, Europe trundles on, with regular crises (as in Spain and Italy recently and soon in Cyprus and France) meaning stop gap sticking plaster solutions that solve nothing.

END_OF_DOCUMENT_TOKEN_TO_BE_REPLACED

Life in the Eurozone: With or Without Sovereign Default

On 14 April 2011 the European University Institute in Florence, Italy (A stunning university might I add …) organised a conference entitled “Life in the Eurozone: With or Without Sovereign Default”. With valuable contributions from several esteemed guest speakers from across the EU, their presentations were published in a book of the same name which can be found at:

I’ve summarised their findings in 15 pages pictorally for you to read, study, pin up on your wall, photocopy, claim credit for…whatever…

PIIGSty Summary: Life in the Eurozone