Fact: The European banking sector is sick. Once a vibrant area bursting with credit, now you’d be lucky to get your credit card application approved. The problem with banking is that the sector is the lubricant ‘oil’ that makes the economic ‘engine’ work. Without it, your economy is sunk. Across Europe, one of the most overused (and misunderstood) phrases these days is ‘burning the bondholders.’ What exactly does this mean?

In banks, there are three groups:

Lets use Ireland as an example. Irish banks need investors. Since Ireland is so small, it needs international investors from across Europe, Asia, the US and beyond.  A bank is unique in that it has both shareholders (i.e. receive % of profits each year) and bondholders (which are like super-shareholders as they get paid interest payments and are paid first if the bank goes bust and is sold off).

As strange as it seems, bondholders are treated like depositors under Irish financial law (which is based on English law) meaning that you could have €1 in your bank account or own €1m of bank bonds and be protected under our big bank guarantee. BUT bondholders can’t run. They have to wait to be paid their €80bn+. Depositors can run, hence the long queues on TV of people trying to withdraw their cash. If Ireland doesn’t pay the bondholders, who are affected?

Remember the ‘scheduled wind down of Anglo Irish Bank?’  The ‘private’ bondholders were paid, but some people remain to be paid what they’re owed, and those people are predominately European governments, and the ECB. As Michael Lewis wrote recently in Vanity Fair “This, by the way, is why there are so many important-looking foreigners in Dublin, dining alone at night. They’re here to make sure someone gets his money back.”

Governments, like banks, also sell bonds for ready cash. Some propose that the Irish government ‘burn’ these bondholders and save billions by not paying and save €25-30 billion. The Central Bank, in their findings, suggest the realistic figure is around €13-14bn, as the table below shows. 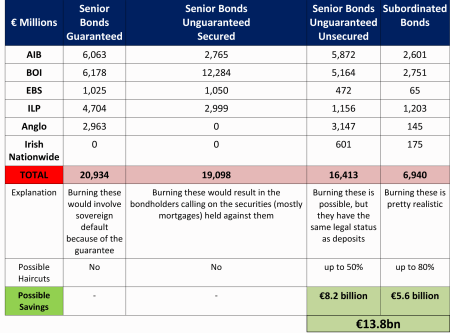 Remember, ‘‘I’ could = governments, banks and big international companies,’ so…the big one here is banks. Big German and French banks.  And that really scares the chief bank, the European Central Bank (ECB). They’re propping up Irish banks to the tune of €96bn and doesn’t want to ‘burn’ bondholders as they may trigger a knock-on effect of investor panic. This panic would then cause depositors to panic and then the banks would collapse anyway. Talk about a financial tightrope!

This entry was posted on Thursday, August 4th, 2011 at 18:38 and is filed under Lessons. You can follow any responses to this entry through the RSS 2.0 feed. You can leave a response, or trackback from your own site.