Lesson 2: Can We Ditch the Euro?

One way to speed up the balancing of the PIIGS finances (to get some credibility back from the markets, remember!) is to reduce the value of your currency or break away from a bigger currency and set up a new one.  As euro-members, eurozone (EZ) countries can’t fiddle around with the value of their currencies which they could before i.e. making their currencies cheaper so others buy more of what you produce and drive up demand for your exports, businesses and jobs.

This means EZ countries can’t just break off from the euro and set up a new currency for themselves (or an old currency; i.e. bring back the Punt, Escudo, Drachma etc). Put simply, it would set alarm bells ringing for investors who suddenly realize that you’ve given up a currency anchored in ECB HQ (and politically in Berlin and Paris) for one anchored in Dublin, Athens, Lisbon, Madrid or Rome… places where the fantastic decisions were made that put the PIIGS in the giant mess in the first place. In any event, it mightn’t make any difference to the big problem – the national/sovereign debt piles. Lets say Ireland wants to restablish the Punt. Heres the pros and cons. 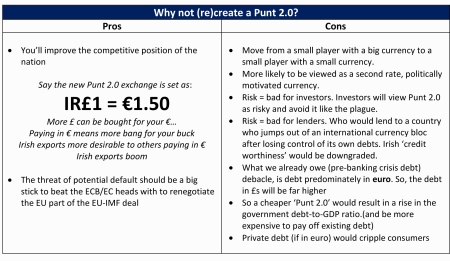 Like during any real disaster, some are more concerned with arguing that the eurozone led itself into this mess in the first place by having a lax attitude toward the entrance requirements (the Maastricht Criteria) and lax regulation (the Stability and Growth pact) rather than addressing how to fix the problem.  Current debt levels force countries to make the hard choices in other areas, such as the main government account deficit by cutting public spending and increasing debt. There is, obviously, a limit.

With so much uncertainty, the only real credible elemnt the PIIGS are clasping onto for dear life is the euro and ECB control of monetary policy. German leadership (of the euro) means shrewd German policies – and the markets like these. But it was never envisioned that we’d have a banking crisis on top of deep fiscal crises in previously sound economies. An obvious altternative solution would be to temporarily suspend debt repayment to certain parties (i.e. certain bondholders) and only pay those who need to be paid – but this brings challenges to those big Northern European banks who own PIIGS debt.

So, no. You can’t scrap the euro. It would put a gun to your own head and giving the ability to pull the trigger to millions of unknown people. Your debt pile remains – in Punts, in euros, in golden coins, in lumps of coal – whatever unit of value you want. You still owe it. The only correct action is to fix the pile – and this is Europes challenge. One way or another.

This entry was posted on Friday, August 5th, 2011 at 18:03 and is filed under Lessons. You can follow any responses to this entry through the RSS 2.0 feed. You can leave a response, or trackback from your own site.