If you need to know about only two men on the planet earth at this moment – these are the two.  John Maynard Keynes and Friedrich Hayek are two greater economic thinkers of the 20th century. More interestingly, their views are polar opposites in economic theory…

So what are these two guys talking about?

Keynes adopts a ‘Top Down’ liberal approach. According to Keynes “in the long run, we’re all dead” – so we can’t wait on market forces to gradually turn the economy around. Government spending (stimulus packages) can create employment and growth in the economy in a recession/’bust’. Booms usually mean that interest rates are low when a bust hits (because booms usually slow before a bust…so authorities try to keep boom going by lowering interest rates).  The rates are then kept artificially lower by an expansion of cheap credit/easy money. Lowering them further won’t stir enough activity to keep demand up (Liquidity trap). Some demand might come from savings, so people shouldn’t hoard money away, they need to spend it!

The economic ‘boom and bust’ cycles WILL happen because of peoples ‘animal spirit’ – like saying ‘boys will be boys’, people will act like people do – the world is naturally vicious and volatile so, like people can fail and do unexpected things, so can free markets. Business is driven by the ‘animal spirit’, that’s what determines growth. How? 1 person spending reverberates around the system – 1 person buys a car, this gives the car dealer income when he can then spend buying a new TV, when gives the TV store income to then and a few new books which give the book store owner income..and so on. So 1 person buying that car, could mean 4 or 10 or 50 people then get some sort of income down the line. This is the ‘multiplier effect.’

Economic activity depends on total (aggregate demand) or spending power – so if this is allowed spiral downward, then the economy will bottom out at a level well below ‘optimal’ with high unemployment and high levels of poverty. The pain of unemployment is felt now, so action is needed now to solve it. If an economy is ‘bust’ – it means the ‘circular flow of income’ is stalled, something austerity (spending cuts) would make worse. The government can support demand by pumping money into the economic engine, providing that much needed spark to get it going again even it means borrowing a lot to sort things out (i.e. printing money).This can be in many forms – spending on war, public works projects etc. Ideally this should be profitable for the government but if it cant be profitable, then it can be something as trivial as employing people to dig holes and fill them in again.

The government also needs to take an active role – provide tight regulation and oversight on big business (i.e. Wall Street, City of London etc) and thus the government can steer markets rather than ‘let them run riot.’

According to Keynes’ theory, the 1930s Great Depression  (born in the 1920s Recession)…

Hayek adopts a ‘Bottom Up’ conservative approach. Investments must be based on real savings not government spending or artificially low interest rates. Theres no ‘circular flow’ to the economy – its far more complex than that. The economy is organic, it cant be controlled or ‘steered’ to do what you want. Humans don’t behave as predictably as that. Low interest rates cause the ‘boom and bust’ cycle – not Keynes ‘animal spirit’ theory. Busts are the hangovers from malinvestment in the boom times. Low interest rate booms mean people will make hay – cheap credit means more house buying, a movement from savings into riskier areas like the stock markets and generally stupid things in the short run as consumers forget about the future. In booms, credit creates more credit causing inflation (price rises) – people binge on the good times – and the money has to go somewhere – usually on housing – but the economy is founded on credit not savings! Its hugely unstable.

The economy Is ALL about supply and demand – suddenly, people realise theres not enough resources – the economy begins to overheat – interest rates rise to pull money out of the economy and into the banks to calm it down. Your economy is built now built on devalued capital. In busts, people hoard savings – until they have confidence again. People need (like a recovering alcoholic) to remember the long run strategy – and stick to it!  Pumping in money for short term gain will when the economy is on its knees will just be funnelled into already failing weakened areas (hence why they got the money in the first place! If they were doing well, they wouldn’t need it!). Stop bailing out losers – this is cronyism at its worst.  Malinvestments causes ‘busts’ so bailing out or pumping more money into these areas is definitely not going to help return the economy to health. So failing businesses should be ignored and let crumble – gaining Hayek and moniker of a ‘liquidator do-nothing’ economist.

Yes, the public suffers in ‘busts’ so we need to avoid them. How? Entrepreneurship – produce real long lasting growth, a basis for a future economy – strengthen its foundation rather than pumping money into a festering wound.  Without interfering– prices will hit equilibrium and decide efficiency – so let prices WORK!

According to Hayek’s theory, the 1930s Great Depression  (born in the 1920s Recession)…

On the face of it, you can see why Keynes approach is that bit ‘sexier’ to politicians across the world – there are obvious political incentives to engage in stimulus spending – targeting it in areas which need it and ensuring an extra few votes come election time. Recent stimulus package such as the 2009 $800bn Obama ‘Recovery and Reinvestment’ package in the US was a Keynesian package which had limited measurable success – as a sizable chunk of the spending passed to states to make up for their own budget shortfalls. This mean it was less of a stimulus and more of a stop-gap ‘cushion’ avoiding the worst effects of deep cuts in state budgets. The recent debt has seen a huge ideological move from Keynesianism to Hayekian theory. Of course, following Hayek would have still mean Lehman happened, and many other major integral banks  (and therefore countries i.e. the PIIGS?) along with it. The damage caused by allowing that would be incalculable, extraordinarily deep and as modern history proves – have big consequences for democracies across the world. Today, we need leadership – and alas we must look toward the politicians Hayek is so weary about and Keynes put so much faith in.

To sum up, remember another thing. National income/Aggregate Demand/Output/GDP which is collectively called ‘Y’ is measured as follows: 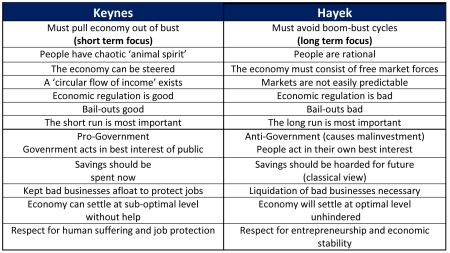 This entry was posted on Tuesday, August 9th, 2011 at 17:17 and is filed under Good Views. You can follow any responses to this entry through the RSS 2.0 feed. You can leave a response, or trackback from your own site.

One Response to The Great Economist Debate: Keynes or Hayek?