On April 12/13,  EU Finance Ministers met at an informal meeting in Dublin. These ministers meet in a EU Council configuration known as ‘ECOFIN’ for Economic and Finance Ministers (and was preceded by a meeting of the Eurogroup).  PIIGSty has produced a handy explainer with the key terms and acronyms. 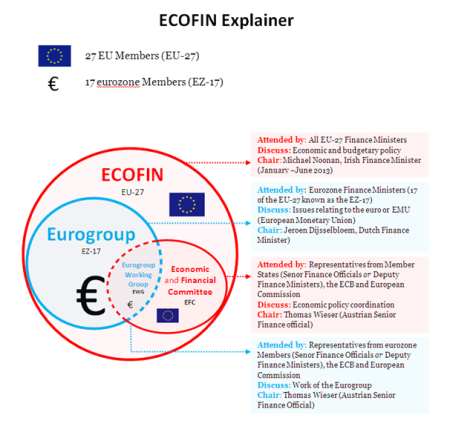 The 17 Member States of the EU (of 27) who have adopted the euro as their official currency. The 17 are Austria, Belgium, Cyprus, Estonia, Finland, France, Germany, Greece, Ireland, Italy, Luxembourg, Malta, Netherlands, Portugal, Slovakia, Slovenia and Spain. 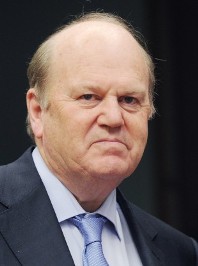 Economic and Financial Affairs Council (ECOFIN) is a meeting of the Economics and Finance Ministers of all 27 EU Member States. When budgetary issues are discussed, Budget Ministers also attend.

The ECOFIN Council meets once a month in Brussels to discuss economic policy and budgetary policy and once (informally) in the country holding the Presidency of the Council of the EU (previously known as the Council of Ministers).

They receive a report of the Eurogroup meeting taking place before ECOFIN, and consider any legislative or other issues that arise from Eurogroup which may require decision by the 27 Member States.

The Finance Minister of the country holding the Presidency chairs ECOFIN, so from January to June 2013 the Irish Minister for Finance, Michael Noonan, chairs these meetings. 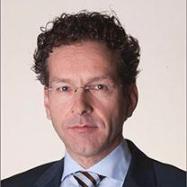 The Eurogroup, the main forum for the management of the single currency area, is an informal body that brings together the finance ministers of countries whose currency is the euro.

The Commissioner for Economic and Monetary Affairs, as well as the President of the European Central Bank (ECB), also participate in Eurogroup meetings.

The Eurogroup meets at least once a month, usually on the day before the ECOFIN to discuss matters particular to the euro. They can also call additional meetings when required.

This group has a permanent chairperson. Currently, it is the Dutch Finance Minister Jeroen Dijsselbloem, who took over this position in January 2013.

Olli Rehn is the (Finnish) Commissioner for Economic and Financial Affairs and the euro. He is also one of the Vice-Presidents of the European Commission.

The Economic and Financial Committee promotes policy coordination and reports regularly to the Council and Commission on economic and financial matters among Member States. It representation includes officials from Member States and their central banks, the ECB and the European Commission. The Committee also meets in a eurozone (EZ-17) configuration called the Eurogroup Working Group (EWG).

The Eurogroup Working Group (EWG) prepares the work of the Eurogroup. It is composed of senior finance ministry officials from eurozone members (or deputy finance ministers) and representatives from the ECB and the European Commission. Its full time President (currently Thomas Wieser) is also President of the EFC. 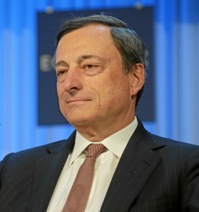 The ECB is the central bank for Europe’s single currency, the euro. The ECB’s stated main task is to maintain the euro’s purchasing power and thus price stability in the euro area. EU members are represented through national central bank governors who sit on the ECB Governing Council, the main decision making body (eurozone governors only) and the General Council (EU-27 governors).

This entry was posted on Tuesday, April 23rd, 2013 at 22:45 and is filed under Uncategorized. You can follow any responses to this entry through the RSS 2.0 feed. You can leave a response, or trackback from your own site.