Otto van Bismarck was by no means your typical democrat (in fact, he was quite anti-democratic, right-wing, and anti-Catholic) but his actions have had an enormous impact on European Affairs ever since.  Bismarck was Minister President (effectively Prime Minister) of the Kingdom of Prussia, a powerful and vast German state, spanning the Northern part of today’s Germany from the Belgian/French border deep into today’s Poland. 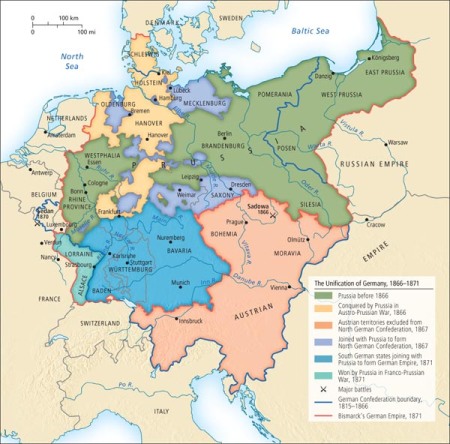 Under Bismarck’s leadership, Prussia consolidated its power by forming a loose confederation of smaller northern states (North German Confederation). Southern states were encouraged by Bismarck to end their relationship with France and its King, Napoleon III. This led to the Franco-Prussian War of 1870-1871, which France lost, leaving Prussia as the most powerful state in Western Europe.

After the war, states agreed to unify under the political and economic leadership of Prussia. The proposed German Empire (or Reich) would consist of 25 German states plus the annexed French territory of Alsace-Lorraine. The positions of President of the North German Confederation and King of Prussia were to be united under the title of German Emperor. In January 1871, the state princes gathered in France’s Versailles Palace where Wilhelm I, the King of Prussia, was proclaimed Emperor Wilhelm of the German Empire. Bismarck, as Minister President (Prime Minister) of Prussia and Federal Chancellor of the North German Confederation, became the Imperial Chancellor of the German Empire in March 1871.

Under the new 1871 constitution, the federal government would consist of an Executive (Emperor and Chancellor – the Emperor being solely responsible for appointing and dismissing the Chancellor), Reichstag (Parliament) and Bundesrat (Senate). Wilhelm would continue to hold extensive powers including: final approval for all laws; ability to assemble or dismiss the Reichstag/Bundesrat and complete control of foreign policy as commander-in-chief of the armed forces. Existing administrators (Kings, Grand dukes, Landgraves) would retain their power as each state would continue to have its own rulers, constitution and parliament with control over local affairs. The unity of this new Empire would be deepened through a process of ‘Prussification’ incorporating a new currency (Reichmarks), a unified federal bank (Reichbank) and a postal service (Reichpost), among other things. Berlin, the capital of Prussia (of course) would be the new capital of the Empire.