The Core of the Apple (Inc) Issue

Did Apple use advantageous tax rates in Ireland improperly to avoid paying tax due to the American Treasury (and so the American people?)

On May 21 last, the US Senate Permanent Subcommittee for Investigations, tasked with investigating Apple’s tax situation, released their findings (WATCH here) which bluntly accused Apple of ‘shielding’ its profits, exploiting loopholes in the US tax code to shift its profits to ‘offshore tax havens’ , in particular Irish owned holding companies. This allowed Apple to pay a corporate tax rate of 15% far below the headline US rate of 35%. Senator Carl Levin (Democrat – Michigan) outlined how US corporate tax accounts for only 9% of federal revenue, thanks to these loopholes. The overall estimated loss to the US Treasury is $1.9tn in corporate profits to non-US tax havens.

In the US, like most major Western economies, a company must pay tax in the country it has been incorporated/registered. In Ireland, a company must pay tax only if its operations are managed on Irish soil. This means companies can register in Ireland (or ‘new’ subsidiary companies of the big US giants like Apple) but not physically operate here, meaning they pay no corporate tax.  This allowed an Irish registered Apple subsidiary to be managed and operated in the US but pay not one dime/cent in tax. Bizarre, but legal. More here

Such a company Apple Sales International did pay some tax, 0.05% on its profits in 2011, as ‘high’ as 2% other years. Apple Sales International generated $74bn in sales revenue between 2009-2012. Another Irish company, Apple Operations International, managed $30bn. The estimated combined tax loss to the US Treasury? $44bn, or nearly $15bn pa – a not unsubstantial figure. Interestingly, these subsidiaries are not technically registered….anywhere.

That’s not the whole story. It has since been alleged that Apple received a ‘sweetheart’ tax deal from the Fianna Fáil Government in 1990 under Taoiseach Charlie Haughey, to avail of an incentivised rate, approximately 2%. In exchange, Apple has since provided Ireland with an estimated 3,500 direct employees.

The problem here is whether Apple received incentives or breaks to reduce its bill or whether is purposely sought to negotiate a ‘2% sweetheart deal’. The latter is serious, the former is perfectly legal.

The Irish Finance Minister Michael Noonan and Taoiseach (Prime Minister) Enda Kenny have denied such the sweetheart deal was made. The Committee reject this, and have been supported in this contention by Apple CEO Tim Cook. In any event, Noonan is technically correct. If a company is not tax resident in Ireland (i.e. like Apple Sales International, which has been registered in Ireland but does not manage its operations here) then quoting a figure of $30bn in revenue and proportioning a tax rate (however miniscule) is ridiculous. It should be zero, because there it is inactive in Ireland. The money is ‘held’ offshore from the US and never ‘repatriated’ i.e. paid to the US Treasury. The US wants to get its 35% on this sum but its task is to somehow decipher a labyrinthine tax code.

As Minister Noonan said – “It appears the rate that is being quoted is got as follows: the tax charged in Ireland on the branch activities in Ireland of companies that are not resident here on the one hand, is divided by the entire profit of the companies concerned, as if they were resident here, which they are not, on the other hand.” If Ireland was, in fact, a tax haven then shouldn’t Ireland benefit somewhat from this amount? Yes. Does Ireland benefit? Nope.

The question here is ethics and fairness, not legality. In a time of continued austerity, bailouts and hardship – the idea of a cash wealthy American super-company which provides flashy iPhones, iPads and iPods to nearly every man, woman and child (you would nearly think, anyway) trying its best to avoid paying its fair share in tax while the the public are hounded and squeezed for every last euro/dollar/pound/ruble seems just a tad unfair and inequitable.

However, multinationals employs anywhere between 100,000 and 150,000 employees in Ireland and in a recovering country with over 14% unemployment, jobs are currency. The Irish corporation tax level has long been a bone of contention with its EU partners, keen to harmonise taxation to promote fiscal unity across the eurozone and bolster the euro. With the issues of tax havens and fraud featuring strongly on the EU agenda going forward, this issue is not expected to disappear soon. Thens there the issue of being a good team player, especially considering Ireland’s huge efforts to assiduously adhere to the troika bailout programme despite demands to burn the unsecured bondholders, notably those in Northern European banks.

Answer to the original question we posed at the beginning? Apple did nothing illegal. Your own definition of improper is needed to answer the rest.

More detail on this issue is available through this article

May 30: Joanne Richardson, Chief Executive of the American Chamber of Commerce (Ireland) writes an OpEd piece in the Irish Times, declaring that Ireland is not, despite the Committees findings, a tax haven. Her reasoning is straightforward. As the article states:  The OECD identifies four key indicators of a tax haven, none of which she declares applies to Ireland.

She also heralds the fact that, “in December 2012, Ireland became one of the first countries in the world to sign an agreement with the US to improve international tax compliance and implement FATCA (Foreign Account Tax Compliance Act) – an emerging international standard for the automatic exchange of tax information.”

May 31: The Irish Ambassador to the US, Michael Collins writes to the two US Senators (an unusual step). The letter states: 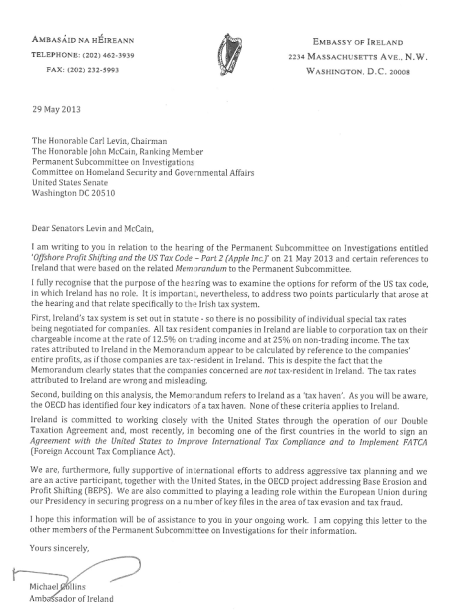 June 1:  The US Senators reject the interventions, arguing again that Ireland is tax haven.

“Testimony by key Apple executives, including CEO Tim Cook and head of tax operations Phillip Bullock, corroborates that Apple had a special arrangement with the Irish Government that, since 2003, resulted in an effective tax rate of 2pc or less,” the senators said in their statement.

“Most reasonable people would agree that negotiating special tax arrangements that allow companies to pay little or no income tax meets a common-sense definition of a tax haven,” they added.

This entry was posted on Tuesday, May 28th, 2013 at 02:11 and is filed under Musings. You can follow any responses to this entry through the RSS 2.0 feed. You can leave a response, or trackback from your own site.